May 29, 2014
Scott Hanselman wrote a nice blog post back in January about some of the issues you might face running Windows on a High DPI screen like that of a Surface Pro or Lenova Yoga. I'm kindof mystified that he didn't mention Remote Desktop though because thats been the number one problem for me on High DPI screens.

But, in practice, I regularly have to remote into Server 2008 machines and yes even Server 2003. If you do that from a high DPI screen, the remote desktop is rendered at regular pixel size, which makes everything tiny.

Its hard to show screenshots of High DPI screens that correctly convey the pixel size, so I've photoshopped them onto a picture of a Surface and its pen, to give you an idea of scale: 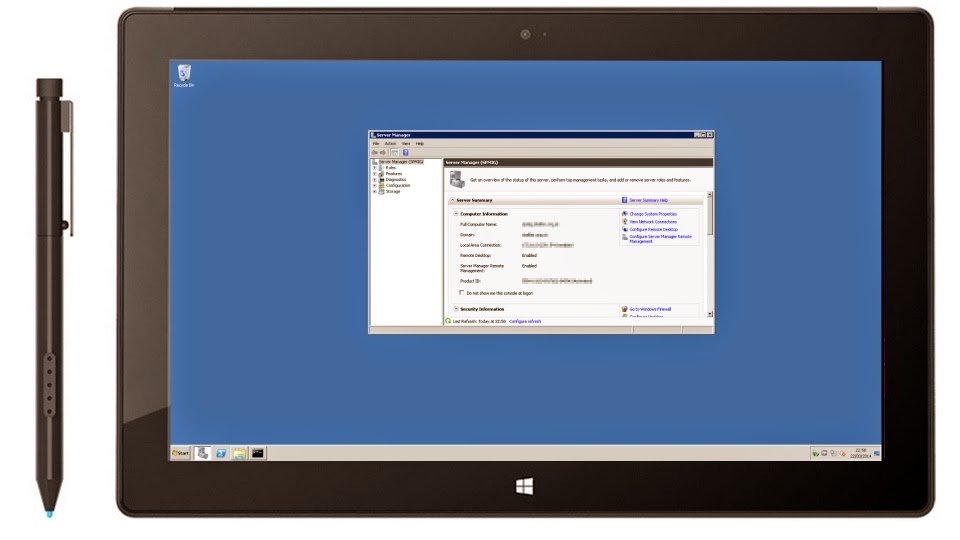 Suffice to say, its hard to get anything done when everything is that size. There are an annoying number of not-quite-right solutions to this that don't work:
Turns out the solution is to install an alternative RDP client with a similar sounding name of Remote Desktop Connection Manager 2.2

This is a souped-up version of the Windows RDP client, apparently intended for people switching between many different servers. It displays a tree of servers on a panel to the left of the screen, and displays the remote machines desktop on the rest of the screen. With the right settings, you can get it to display a sane sized desktop on a high DPI screen: 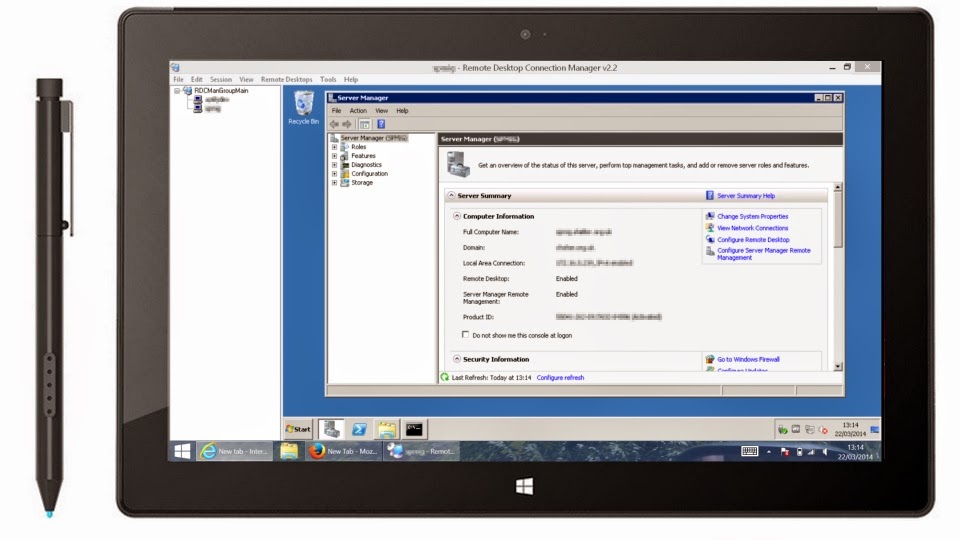 As you can see, the remote machine now appears within the Remote Desktop Connection Manager client area, but it is rendered at a much more usable scale.

To get it to display correctly, I needed to set the 'Remote Desktop Settings' after adding a new server, and select the 'Same as client area' option: 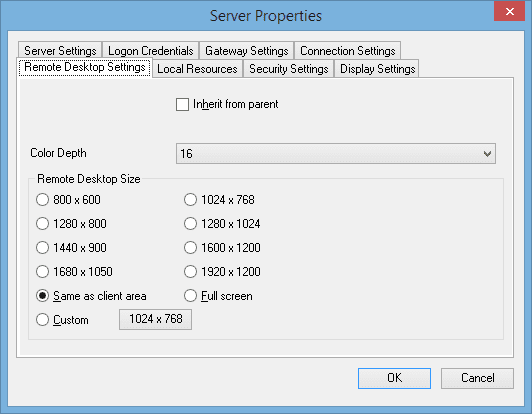 Thanks to Falafel Software's blog post for pointing me in the direction of this solution.

Edit (July 2015): This is a Windows 8 solution, it wont work on Windows 7. Also, there is now a newer version of Remote Desktop Connection Manager (2.7) that doesn't fix scaling as described here. So you need to get the 2.2 version (linked above) in order for this to work.

Max said…
Hi Ian, thanks for your response!

Yes, I tried that 'Same as client area' setting. Also, my Text size settings is set to 125%.

Buck said…
This fixed the scaling issue, but when in fullscreen how do you access the onscreen handwriting pane?
August 15, 2014 at 11:27 AM

Anonymous said…
I have been having nightmare for this problem. And installing remote desktop connection manager really helps. Thank you so much.
November 3, 2014 at 6:43 PM

Anonymous said…
My remote desktop requires a smart card for authentication. Is there a way to get Remote Desktop Control Manager 2.2 to use a smart card?
December 3, 2014 at 1:54 PM

also here, this doesn't work (using Windows 7). There is no scaling at all.

Anonymous said…
Version 2.7 still works too, it just disables the DPI scaling by default, but it still is an option. If you browse to the location of RDCMan.exe. (C:\Program Files (x86)\Microsoft\Remote Desktop Connection Manager) by default. Right click RDCMan.exe select properties, select Compatibility tab and uncheck "Disable display scaling on high DPI settings".
December 11, 2015 at 9:08 AM

Anonymous said…
-- Version 2.7 still works too, it just disables the DPI scaling by default, but it still is an option. If you browse to the location of RDCMan.exe. (C:\Program Files (x86)\Microsoft\Remote Desktop Connection Manager) by default. Right click RDCMan.exe select properties, select Compatibility tab and uncheck "Disable display scaling on high DPI settings". --

yeah sweet thanks. (it does not seem to be able to enlarge remote desktop when enlarging window, but this can be easily fixed by starting remote desktop connection in maxed window - then it all works perfectly)

Anonymous said…
Same problem here with Server 2012 and Surface 4. M$ RDP picked the resolution of the surface. I cant see anything. The best solution was to install Royal TS. I even have since version 1.8 a licensed version. Best software for RDP connections managing.

Anonymous said…
It does work with 2.7, see this link:

Amit Misra said…
Have you tried using R-HUB remote support servers http://www.rhubcom.com/v5/remote-Support.html on Windows high DPI screens? If not, then I would recommend try it out. It works well.
October 19, 2016 at 11:52 PM

March 10, 2008
In 1987, Acorn launched the Archimedes home computer. At the time, it was the fastest desktop computer in the world, and at the time, I was fortunate enough to have one to experiment with. The Archimedes was great, but it never really took off commercially. However, it was built around the ARM processor, which Acorn had designed itself when it could not find any existing processors suitable for its 32-bit ambitions. The ARM processor was a masterpiece of simple and intuitive design, and its still around today, with most of the instruction set pretty much unchanged. In fact, you've probably got one in your pocket right now. Its design makes it process very efficiently on low energy intake, and hence it is estimated that about 98% of all mobile phones contain an ARM chip. Over 10 billion ARM chips have been shipped, and they outnumber Intel's long running x86 series of chips by a factor of about 5 to 10. I had learned programming on the BBC Model B , and when we got the A
7 comments
Read more