September 20, 2013
Currently I'm working on two separate projects for two different charities - one of them implementing Dynamics CRM, the other implementing Salesforce.

As I've said before, the two systems are surprisingly similar in philosophy and features, but there are some differences. Probably the most important one to discuss is price. Both Salesforce and Dynamics CRM offer steep discounts for Charities and Not-for-Profits. This graph of total cost per month versus no of users sums it up: 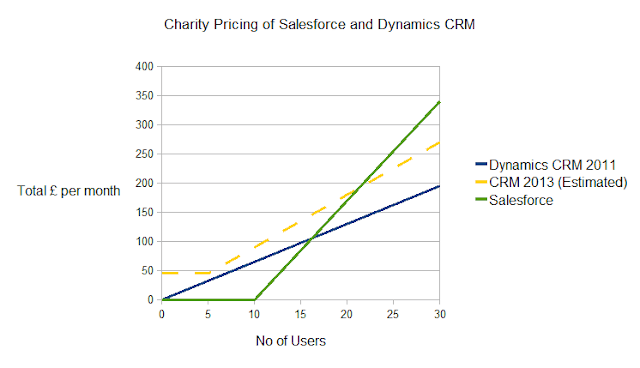 Broadly this shows that Salesforce is actually cheaper (or free) for small numbers of users, although when you get to more than about 16 or 17 users Dynamics CRM Online works out cheaper. The estimated charity price for the imminent new release of Dynamics CRM Online is also shown, but this has not been confirmed yet (see below).

This graph hides a lot of the nuances though, so here's a more thorough discussion


Salesforce is very clear about its Charity pricing - qualifying charities get 10 licenses for free, and any subsequent licenses have an 80% discount.

So applying that discount to the UK prices we get a basic user cost of:

Note that there are other cheaper editions of Salesforce (Professional, Group etc) which may be adequate for small organisations or specific situations. But everyone I've encountered has been using Enterprise Edition because it includes Workflow and the Web Services API (among lots of other things).

Within a given Edition of Salesforce (say, Enterprise Edition) you are allowed to mix different user license types. For example 'Salesforce Platform' licenses are cheaper but do not have access to some of the built-in objects and features. In practice though, to take advantage of this, the Salesforce system you are building will need to be very carefully designed by someone that both understands all the difference license types and understands the requirements of what you are trying to build. That is no mean feat.

The amount of storage space Salesforce gives you is related to the number of user licenses. For Enterprise edition, it works like this:
You can purchase extra space, although prices for this are not published and are generally described as 'expensive'.

Salesforce will apply the same 80% charity discount to other items and services as well, such as customer portal logins. However they are very unlikely to offer any further discount on top of that.


Firstly, I should point out that Dynamics CRM can be hosted in three different ways:
For Dynamics CRM Online 2011 then, the current listed commercial price is £28.70 per user per month. The official price for qualifying charities is rather less easy to find but this Microsoft page lists it as $9.99 per user per month, which then equates to about £6.75 per user per month in the UK (as confirmed by Preact in their faq). So thats about 77% discount.

But ... over the next few months CRM 2013 is being rolled out, and with it comes a price change. Dynamics CRM Online 2013 will have with three different pricing tiers:
See this PowerObjects blog for a discussion of what those prices get you. However the expectation seems to be that most people will go for Professional, and Professional is the only one that covers the feature set that Crm 2011 customers currently have. It seems that a minimum of 5 licenses might also be required.

Charity prices have not been revealed yet, but it looks like a price increase is on the cards. If we apply the same proportional discount as before, we get the following guesstimate:

Currently the Dynamics CRM approach to storage space is very simple: You get 5GB to start with, and the charity price for an extra GB is about £6.50 per month. With the 2013 release, they're changing it a bit, thowing in an extra 2.5 GB for free for every 20 professional licenses purchased, up to 50GB.


The above covers the basics, but there are other factors to take into account.

For example, "Portals" - whereby the CRM system provides a web interface for your customers to log into - have different license prices. Salesforce has a number of different portal options and licensing models - see here for an overview and this blog post for a diagram of the options. Dynamics CRM has traditionally only offered portal licenses for the non-Online versions, but it seems the new 'Essential' license for Crm Online 2013 is intended for portal users.

Its nearly always vital to have a development or test environment for your system so that you can develop customisations away from the live environment. Salesforce calls these Sandboxes and for Enterprise edition you generally have to purchase them separately (see here for discussion of prices).

Since Jan 2013 Dynamics CRM Online has had the option for multiple 'instances', although they have been quite expensive - about £350 per month with apparently no charity discount. Additional instances do not require additional user licenses but do take up space in the existing storage space quota.  This situation is set to improve with Crm Online 2013 - it will be possible to buy 'non-production instances' that are cheaper than regular instances, and one 'non-production instance' will be thrown in for free if you buy 25 or more Professional licenses.


For small numbers of Charity users, Salesforce works out cheaper, for more than about 16 users, Dynamics CRM might work out cheaper. There are price changes coming with Dynamics CRM 2013 that are not yet known, but it will still be cheaper than Salesforce per-user. CRM 2013 also brings a much-improved user interface. There are other factors to take account of when estimating the price of a system - storage, different license types, dev and test environments.

But which system is better? This is not an easy question to answer. Salesforce is more expensive, and one could argue that it has a broader and more mature set of features. But is it far enough ahead to justify the extra money? This comes down to which features matter to you. Both systems are large, complex systems with many many features, and although there is a lot of overlap, there are still lots of differences. In short, to choose between them you need to do an accurate, detailed analysis of the features each can offer against the features you want, and decide where you want to make compromises.

nzregs said…
An advantage of Dynamics CRM for charities is that they can use the same login/password as they use for their free Office 365 licences :-)

March 10, 2008
In 1987, Acorn launched the Archimedes home computer. At the time, it was the fastest desktop computer in the world, and at the time, I was fortunate enough to have one to experiment with. The Archimedes was great, but it never really took off commercially. However, it was built around the ARM processor, which Acorn had designed itself when it could not find any existing processors suitable for its 32-bit ambitions. The ARM processor was a masterpiece of simple and intuitive design, and its still around today, with most of the instruction set pretty much unchanged. In fact, you've probably got one in your pocket right now. Its design makes it process very efficiently on low energy intake, and hence it is estimated that about 98% of all mobile phones contain an ARM chip. Over 10 billion ARM chips have been shipped, and they outnumber Intel's long running x86 series of chips by a factor of about 5 to 10. I had learned programming on the BBC Model B , and when we got the A
7 comments
Read more