A closer look at the Dynamics CRM Process Control

The usefulness of Checklists


If you use standard 'flowchart' notation to describe how to make a cup of tea, you'll get something very linear, like this: 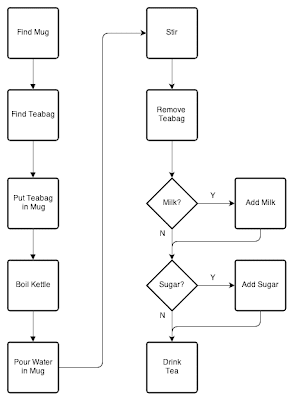 A lot of space in a standard flowchart is taken up describing what order things should happen in. But actually, for some of the steps, the order is not that important. We certainly have to wait for kettle to boil before pouring the water into the mug, but the order in which we add milk and sugar doesn't matter. If we re-draw the process using a notation that allows for certain steps to happen in any order, we get something like this:

If you look at real world business processes, you'll probably find the same thing: although there are certain steps that do have to be ordered, a lot of them can be split into 'stages' and then tackled in any order. In many cases a series of checklists is a much better model for business processes than a classic flowchart.


Someone at Microsoft must have noticed this too, because the new CRM Process Control is all about modelling processes as a series of checklists.

The Process Control is the centrepiece of a major overhaul to the Dynamics CRM UI that I wrote about previously. It was originally released in December 2012 update (aka 'Polaris') and is being further enhanced in the upcoming Dynamics CRM 2013 release (aka 'Orion'). It looks like this:


Many (but not all) steps correspond to a field on an entity. They render differently depending on the type of field. Here's an animation of the main field types and what their Steps look like:

(click on the animation to see the full-size version)

Note that for Lookup fields, initially the Process Control suggests a few matches based on the text entered, but there is also an option to 'Look Up More Records' which brings up a more comprehensive search panel.

In the 'Process Control Customization Tool', to add a field-related steps, you simply add the step and select the field: 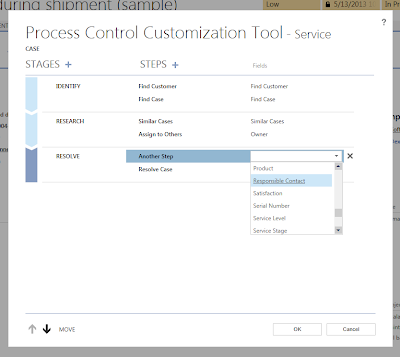 The convention seems to be that if a field appears in a Process Flow, you probably don't put it on the main form as well. The idea presumably is to simplify forms and only show the user fields relevant to the current stage. You can of course still put the field on the main form if you want. However (in Polaris at least) updating the field in one place will not automatically update it in the other. For example if 'Estimated Budget' appears on the Process Control and on the main form, if you fill it in on the form you'll have to refresh the screen before it also shows on the Process Control, and vice-versa.


Not all Steps correspond directly to a field. In the 'Polaris' version of the Customization Tool, certain entities give you a special drop-down at the top of the tool for selecting special steps: 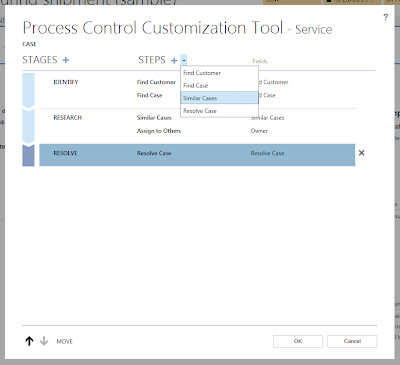 The "Find Customer" and "Find Case" steps allow the user to perform a search, but they also have a 'New' button that displays a Quick Create panel that allows the user to create a new record directly: 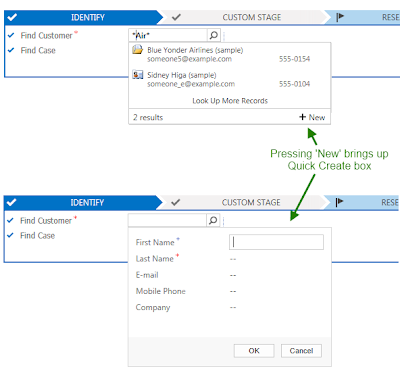 The "Similar Cases" step is very specific - it brings up a large panel that allows the user to search cases and also displays posts and activities for those cases: 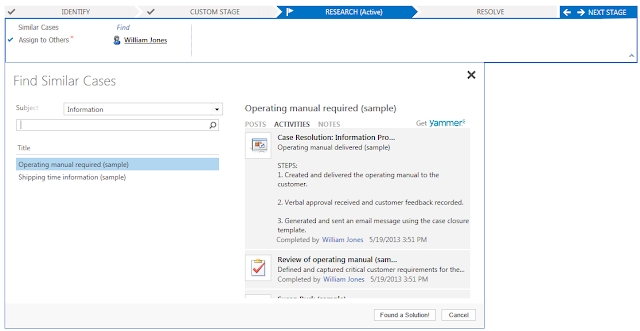 The existence of such a specific step suggests that (maybe) it will be possible to define arbitrary custom steps for the Process Control that can display arbitrary panels (perhaps defined via FormXml). I haven't seen any announcements about this, so perhaps it wont be possible for a while yet. But fingers crossed.

The "Resolve Case" step does not have any special UI behaviour but it does set the state of the Case to Resolved. Again, this suggests that it might be possible in future to tie arbitrary bits of processing to Steps. But again, I'm not aware of any announcements so far.


Several of the built in processes in Polaris have 'tick off' steps that appear as 'mark complete'. When you click on them, they change to 'complete':

This is done via an innovative use (or 'hack') of the TwoOptions field type. The Two Options are defined as 'mark complete' and 'complete', with 'mark complete' set as the default: 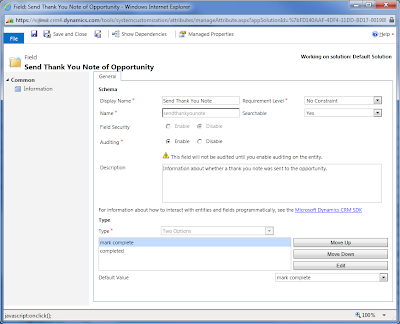 
The upcoming Orion release (Dynamics CRM 2013) is going to bring a number of changes and improvements to Process Flows and the Process Control.

(This screenshot taken from Reuben Krippner's recent presentation at WPC2013)


So, the concept of a series of checklists is a good one, and in the new Dynamics CRM UI, Microsoft have found a way to implement it in a simple but flexible way.

As a developer, I'm left wondering about the following:
We should know more over the next three or four months as Orion is rolled out.