June 30, 2012
I've lived in Lambeth for 11 of the last 15 years, but I've never spent that much time thinking about Lambeth Council. I appreciated it when they started collecting cardboard for recycling. I was vaguely impressed when I could pay my council tax online rather than by post. I enjoyed Myatts Fields and Brockwell Park. And I was wary of the councillor pamphlets, which only ever seemed to arrive when they needed me to vote. I understood the benefits of local government, but the reality of trying to engage with it meant reading highly partisan election leaflets that highlighted the negatives and blamed the other parties for them. So, I was not particularly engaged.

Still, I understood that local councils were potentially a force for good, so when Good For Nothing announced that they were doing an event with Lambeth Council I signed up. I'm glad I did; it was a great event, and very ... well ... engaging. 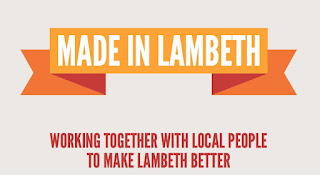 Briefly, the idea behind the event was this:

Lambeth Council are aiming to be a Co-operative Council, the principles of which are defined here but essentially the idea seems to be to involve the community much more in everything; planning, provision, feedback. Egged on by local techies, parts of the council had agreed to take part in a hackathon to work with the tech/design community on a few specific projects. Officially, they didn't really call it a 'hackathon', and I suppose it had slightly more design/ideas people and slightly fewer coders than previous hackathons I've seen. But if I had to describe it quickly, I'd call it a local council tech/design/ideas hackathon.

Three project briefs were circulated in the run-up to the event:
Then, at the event launch, forty five people got together - some from the council, but mostly volunteers - and the briefs were explained in more detail. And Good for Nothing laid out their groundrules and their manifesto.Then off we went, with 48 hours from 6pm on Thurs 21st June to 6pm on Sat 23rd.

I was quite tempted by Parks, but I ended up on the Digital team. Some of the web team from the council were there, and they had a pretty good idea what they wanted: An open-source CMS powered web site, that could be built and edited in co-operation with the community. They were keen on trying out Drupal, and there were a couple of coders present who knew Drupal, so off we went.

Correctly understood, the word 'hack' in 'hackathon' means 'making' not 'illicitly breaking into things' - an esoteric distinction of terminology that many techies understand, but is not so clear to non-techies. The people that go to hackathons are, its pretty safe to say, not the same people who are controlling botnets. This slight branding problem is perhaps holding the hackathon type event back from becoming even more popular. Wisely in this instance, Good for Nothing had avoided the word 'hack' altogether.

Still, the room had the usual buzz that hackathons do. Some of the council folk found the atmosphere very refreshing, and the excitement of being able to get something done without a risk register and hundreds of pages of project documentation seemed to be giving them something of an epiphany. Some pretty awesome stuff did get done - more on that below. But I hope those council folk didn't leave with the impression that their usual way of working didn't have merits of its own. Certain phases of certain projects are well suited to a hackathon format but you couldn't work like that all the time. Councils have a ton of different legal responsibilities, and things like risk registers, paper trails, review meetings and approval processes all have their place. The paperwork-heavy checks and balances are organisational defense mechanisms, with the aim of minimizing costly or serious mistakes. I've seen organisations that didn't have enough beaurocracy, and over the longer term it can be just as damaging as having too much.

To their credit, Good For Nothing and the council had carefully chosen projects and briefs that they thought would work well in a hackathon format, and that was key to the great success of the event. 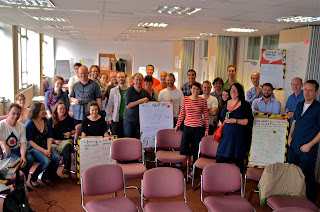 So, here's what (I think) the council got out of the 48 hours:
Here's what I got out of the event:
In summary: With suitable project ideas figured out in advance, the hackathon approach dovetails fantastically with the co-operative council concept.