June 20, 2012
Hackathons are all the rage at the moment, and are great events for lots of reasons. I'm aiming to go to hackathons that have charitable objectives, and hence I was excited to see that a bunch of organisations (the Goverment Digital Service, Go On UK, Westminster City Council, The Connection at St Martins, SHP and Homeless Link) had worked together to organise a Homeless Hack Day on 16th June 2012. 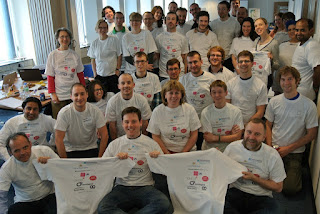 Its easy to imagine ways that modern technology can help charities and agencies that work with the homeless. To the uninitiated (i.e, me before the event) its less obvious how modern technology can help the homeless community directly. But during talks from SHP, Homeless Link and The Connection at St Martins we learned that homeless people have increasing opportunities to get online (hostels have internet stations that are among the busiest parts of the centres) and often have access to standard (ie. non-smart) phones. SHP and St Martins both had very successful projects involving sending out news and info to homeless people by SMS. One challenge homeless people face is their phones getting lost, stolen or broken, so keeping track of their changing numbers can be a problem. On the HomelessHack site, The Challenge page describes some of the ideas that were presented going into the event.

Third-sector tech maestro Jon Foster seemed to be the main hacker-herder for the day, and he did a great job priming us with ideas without leading us too prescriptively in any one direction. The most interesting anthropological bit of a hackthon is when everyone mingles around, suggesting ideas and forming into teams. You have to be un-shy about randomly joining discussions with potential teams, and also not too shy about then randomly leaving them and joining another one. It being a one-day hackathon, we only had 7 hours in total for doing things, so Jon and his team encouraged us to crystallise our ideas as soon as possible. Soon we had settled into six teams. 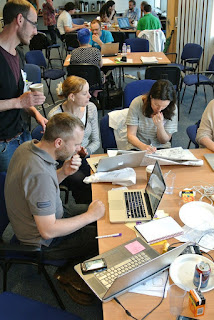 Then we did the doing-things bit. Its quite hard to explain the atmosphere if you haven't done a hackathon before. You meet new people and then rapidly get to work on things, swept along by a wave of enthusiasm and pizzas.

Then the teams did five-minute presentations. It was literally amazing to see what people had done in seven hours.The six projects are detailed on the Homeless Hack Day site:


They were all great, but it was particularly impressive how the Homeless Link API project fed info into the Everyone In project. Everyone In was a smartphone app that allowed people to notify charities and agencies when they see people sleeping rough. It used the Homeless Link API to work out which charity to notify, and also returned a list of relevant agencies to the user so that they could personally offer assistance. It had a great working prototype, and integrated with the open-source Taarifa platform for info collection and visualisation.

I was on the Social Capital team. We started out trying to find ways to make a social network support homeless people, through interaction, positive feedback and building networks of support. However one of our team was actually a homeless overseas student, and in hearing his story of a long bureaucratic struggle to extend his Visa, track down his missing passport and re-establish his official identity, we branched onto a different idea: An SMS based LogBook that would allow homeless people to easily log important information and so give them a better chance of keeping on-top of the things they need to organise. We didn't have time to build any prototypes but we got a lot of design work done, including ideas about how the LogBook could evolve into a social network (hence the Social Capital team name) and from there for it to become a way for people to offer practical donations of support to homeless people. We're writing it up the design now, and hoping it can be used in future hackathons, so watch this space.

The judges, headed up by Marketa Mach, had difficult decisions to make, and they decided to give the awards based on future potential impact. Homeless Link API came first, the Text Donation project came second and Social Capital came third. You can read what the judges said here. I was surprised and delighted that the team I was on came third. I know it sounds like a bit of a cliche, but I really think all of the teams could have won first prize.

The plan is to hold another Homeless Hack Day in a few months time, so it will be really interesting to see what happens next time. Many thanks to @jonfoster, @maakusan, @irenedigital and @teamcampLondon for looking after us, and to my teammates @paolability and @voltron2009.